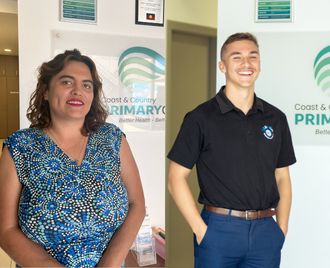 Our scholarship scheme which aims to provide financial peace of mind for First Nation’s people studying at TAFE or University on the Central Coast, is still open!

Our CEO, Kathy Beverley is encouraging Aboriginal and Torres Strait Islander people currently studying at TAFE or University to apply.

“The inaugural scholarship scheme was launched last year and has supported 4 students with the cost of their studies,” said Ms Beverley.

“Our scholarship program provides financial assistance for textbooks and other learning supports for people undertaking studies in the community services or related health fields.”

“At CCPC we are committed to supporting the development of pathways for Aboriginal and Torres Strait Islander students by also providing opportunities for scholarship recipients to undertake work placements with us,” she said.

“We’re committed to growing the diversity of the community services workforce through this program, which was an action from our Reconciliation Action Plan.”

Eight scholarships are awarded each year with recipients receiving $1,250 to assist with textbooks and other learning resources.

“We are proud of the impact that the scholarships are making to support up and coming community leaders,” said Ms Beverley.

Jacob is a proud Gunditjmara man, (Lake Condah, Victoria) who has spent his life growing up on Darkinjung Country, on the Central Coast. He is a recent recipient of the CCPC Aboriginal Scholarship.

Jacob is currently employed as Project Officer, for Barang Regional Alliance while also studying a Bachelor of Indigenous Studies majoring in Government Policy and Political Economy at Newcastle University.

Jacob is not new to CCPC, having been involved in a family wellbeing program as a youth a few years ago. He applied for the CCPC Aboriginal scholarship on Facebook as he was heading into Semester 2 of university to support his studies.

Jacob said that the scholarship has given him financial peace of mind and freedom when it came to being able to afford his university textbooks. He was also able to buy himself a new laptop.

“It has given me some tools and freedom to do my courses,” he said.

Jacob has great aspirations to continue with working with Aboriginal community and developing his leadership skills to influence positive and inclusive reform for Aboriginal people in Australia. The CCPC scholarship is supporting him to realise this ambition.

“I am also part of the Uluru Statement from the Heart dialogue and so reform is something that I am passionate about,” said Jacob.

“In 5-10 years, hopefully I will be the CEO of a Community Controlled organisation that works toward reform, especially for the Central Coast as we often get swallowed into Sydney or Newcastle, but we are our standalone region with a large population of Aboriginal and Torres Strait Islander people on the coast and we have the fastest growing population in Australia and it’s important that we work together to have a unified voice,” he said.

The advice Jacob gives to anyone considering applying for the CCPC scholarship – “is to take every single opportunity and you will have no regrets and will get you out in community, get you connected and open a lot of doors and give yourself freedom.”

Erica Smits is a Gamilaraay woman from Walgett in northwest NSW, who has been living on Darkinjung Country on the Central Coast since she was 12 years old.

Erica describes that she “has big shoes to fill, as she stands on the back of giants” with her family staunch land rights advocates involved in the Freedom Rides with Harry Hall (her uncle and Charlie Perkins).

Erica, (40) is currently Compliance Officer with the Office of the Registrar Aboriginal Land Rights Act 1983 (NSW) and is married with two children. She was a late starter to tertiary education having never graduated high school, she graduated from a Bachelor of Business in 2021and has since commenced her Master of Business in Social Impact with University of NSW.

“I recently moved from a role as a Director with NSW Aboriginal Lands Council to the Office of the Registrar because I want to get into the political side of making land rights changes,” she said.

Erica applied for the CCPC Aboriginal scholarship to help her to purchase an iPad and iPad pencil to use for her university studies.

“I only had a work laptop, and so I thought it would be great to apply for the scholarship to help me to get a device which supported me to access the Apps that the uni’s use,” she said.

Erica strongly encourages other Aboriginal or Torres Strait Islander people who are studying to apply for the CCPC scholarship because it can help to support you to achieve dreams and make a change for Aboriginal people.

“Go for it, sometimes it can be daunting, but if you don’t do it, we’re never going to get anywhere and one day we want to see the first female Aboriginal Prime Minister!”

“I want to follow in the footsteps of my family, and I said this to my Dad on his 60th birthday actually- one day I won’t be known as Keith (Chubby) Hall’s daughter anymore, one day you will wake up and be known as Erica Smits’ father!”